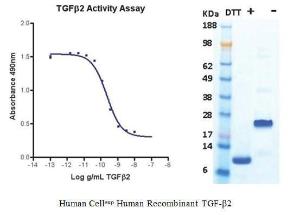 ED₅₀ is typically 0.1 to 0.5 ng/mL. The specific activity was determined by the dose-dependent inhibition of IL-4 induced proliferation of mouse HT-2 cells (BALB/c spleen activated by sheep erythrocytes in the presence of IL-2).

Transforming growth factor betas (TGFβ) mediate many cell-cell interactions that occur during embryonic development. Three TGFβs have been identified in mammals. TGF Beta 1, TGF Beta 2 and TGF Beta 3 are each synthesized as precursor proteins that are very similar in that each is cleaved to yield a 112 amino acid polypeptide that remains associated with the latent portion of the molecule. TGF-beta 1 is involved in hematopoiesis and endothelial differentiation.