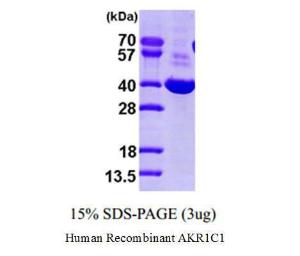 Aldo-keto reductase family 1 member C1 in humans is encoded by the AKR1C1 gene. AKR1C1 transfers progesterone to its inactive state or in other words catalyzes the reaction of 20-alpha-hydroxy progesterone (20-alpha-OHP) in the liver and intestine. AKR1C1 transfers bile and monitors the intrahepatic bile acid concentration though it has a low bile-binding ability. AKR1C1 participates in myelin formation. AKR1C1 is part of the aldo/keto reductase superfamily, which has over 40 known enzymes which catalyze the conversion of aldehydes and ketones to their corresponding alcohols by utilizing NADH and/or NADPH as cofactors thus display overlapping but distinct substrate specificity.