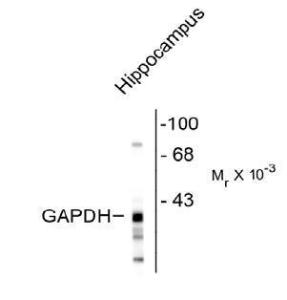 50-267
10075-668EA 582.89 USD
10075-668
Anti-GAPDHS Mouse Monoclonal Antibody [clone: 1D4]
Antibodies
Biological Significance: Glyceraldehyde 3-Phosphate Dehydrogenase (GAPDH) is a metabolic enzyme responsible for catalyzing one step in the glycolytic pathway, the reversible oxidative phosphorylation of glyceraldehyde 3-phosphate. Because GAPDH is a protein expressed in large amounts and which is required at all times for important "house keeping" functions, levels of GAPDH mRNA are often measured and used as standards in studies of mRNA expression. Increasingly, scientists are making use of specific antibodies to GAPDH in comparable studies of levels of protein expression. This antibody can be used as a loading control for western blotting experiments, allowing comparison between the level of this protein and others in a cell or tissue. Apart from a role in glycolysis, GAPDH may have other roles such as in the activation of transcription. GAPDH is reported to bind to a variety of other proteins, including the amyloid precursor protein, mutations in which cause some forms of Alzheimer's disease, and the polyglutamine tracts of Huntingtin, the protein product aberrant forms of which are causative of Huntington's disease. Associations with actin and tubulin have also been reported. The protein may also have a role in the regulation of apoptosis, and interestingly migrates from the cytoplasm into the nucleus when cells become apoptotic.