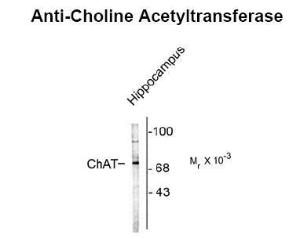 50-265
10075-472EA 582.92 USD
10075-472
Anti-CHAT Goat Polyclonal Antibody
Antibodies
Choline acetyltransferase is a neuronal enzyme which catalyzes the reaction between Acetyl CoA and choline resulting in the formation of acetylcholine. It is therefore found primarily in cholinergic neurons making it a valuable marker for diseases associated with decreased cholinergic function such as Schizophrenia, Alzheimer disease (AD) and Down syndrome (Holt et al. 1999). Decreased choline acetyltransferase activity in particular has been shown in Schizophrenic subjects (Karson et al 1993). It has furthermore been demonstrated that in patients with AD, there are significantly lower levels of cortical ChAT that correlate with severity of the disease as measured by loss of neuropsychological function (Baskin et al. 1999).