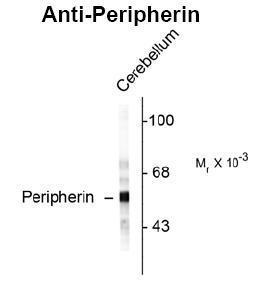 50-259
10075-510EA 499.45 USD
10075-510
Anti-PRPH Chicken Polyclonal Antibody
Antibodies
Peripherin is a ~57 kDa intermediate filament subunit found initially in sensory neurons of the peripheral nervous systems, which gives the protein its name. Subsequently, peripherin was found in some sensory and other neurons of the central nervous system and also in PC12 cells. Peripherin is also expressed in certain neuroendocrine tumors and in the insulin producing cells of the pancreas. Peripherin belongs to the Class III family of intermediate filament subunits which also includes vimentin, glial fibrillary acidic protein (GFAP) and desmin. In contrast to the neurofilaments, peripherin is strongly up-regulated after nerve injury. Antibodies to peripherin can be used in identifying, classifying, and studying neurons throughout the nervous system. Peripherin is also a good diagnostic marker for ballooned axons seen in Lou Gehrig's disease (Amyotrophic lateral sclerosis) and some neuronally derived tumors. Autoantibodies to peripherin are frequently seen in the sera of patients with diabetes. Peripherin is not related to peripherin/RDS, a protein of the photoreceptor outer membrane mutations of which are causative of certain forms of slow retinal degeneration.