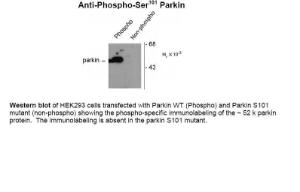 50-247
10075-502EA 582.92 USD
10075-502
Anti-PARK2 Rabbit Polyclonal Antibody
Antibodies
Parkin is an E3 ligase in the ubiquitin-proteasome system. Hereditary Parkinson’s disease is most commonly caused by mutations in the parkin gene and is characterized by the progressive loss of dopaminergic neurons and the presence of Lewy bodies in the substania nigra (Jenner aet al.,1992). Recent evidence suggests that phosphorylation of parkin at Ser101 may have an important regulatory role on its E3 ubiquitin ligase activity (Yamamoto et al., 2005).

The antibody has been directly tested for reactivity in Western blots with human tissue. It is anticipated that the antibody will react with bovine and non-human primate tissues based on the fact that these species have 100% homology with the amino acid sequence used as antigen.