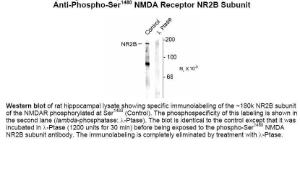 50-234
10075-454EA 582.92 USD
10075-454
Anti-GRIN2B Rabbit Polyclonal Antibody
Antibodies
The NMDA receptor (NMDAR) plays an essential role in memory, neuronal development and it has also been implicated in several disorders of the central nervous system including Alzheimer’s, epilepsy and ischemic neuronal cell death (Grosshans et al., 2002; Wenthold et al., 2003; Carroll and Zukin, 2002). The rat NMDAR1 (NR1) was the first subunit of the NMDAR to be cloned. The NR1 protein can form NMDA activated channels when expressed in Xenopus oocytes but the currents in such channels are much smaller than those seen in situ. Channels with more physiological characteristics are produced when the NR1 subunit is combined with one or more of the NMDAR2 (NR2 A-D) subunits (Ishii et al., 1993). It has been shown that phosphorylation of Ser1480 disrupts the interaction of NR2B with the PDZ domains of PSD-95 and SAP102 and decreases surface NR2B expression in neurons (Chung et al., 2004).

The antibody has been directly tested for reactivity in Western blots with rat tissue. It is anticipated that the antibody will react with bovine, canine, chicken, human, mouse, non-human primate and zebra fish based on the fact that these species have 100% homology with the amino acid sequence used as antigen.