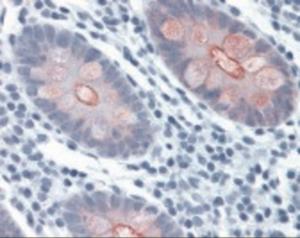 49-936
10079-322EA 491.23 USD
10079-322
Anti-MUC4 Mouse Monoclonal Antibody
Antibodies
MUC4 is a membrane-associated protein of the mucin (MUC) gene family, encoded by a gene on chromosome 3q29 and produced by epithelial cells as a heterodimer. The MUC4 protein is thought to play a protective role for vulnerable epithelia, particularly in the airway, eye, female reproductive tract and mammary gland. Two observations support this hypothesis: (a) MUC4 acts as an anti-adhesive barrier at epithelial and tumor surfaces, and (b) MUC4 binds the receptor tyrosine kinase ErbB2, and can alter its downstream signaling. Alterations in MUC4 expression have been observed in association with a variety of inflammatory and neoplastic states; reduction or loss has been reported in non-small cell lung carcinoma, hyperplastic polyps of the colon, and serrated colon adenomas, while overexpression of the MUC4/Sialomucin complex (SMC) has been identified in malignant progression of mammary tumors in both humans and rats. Suitable for use in Immunohistochemistry. Other applications have not been tested. Recognizes rat MUC4. In normal tissues, stains stomach, colon, and the endothelial cells of small blood vessels and capillaries. In abnormal tissues, this antibody exhibits strong positive staining in colon polyps (3/3 specimens tested), colon carcinoma (4/4), and gastric adenocarcinoma (4/5). Lung adenocarcinoma and ovarian mucinous adenocarcinoma also demonstrated positive staining. Species Crossreactivity: human.

Mucin 4 antibody can be used in ELISA, Western Blot, and immunohistochemistry starting at 10 ?g/mL.