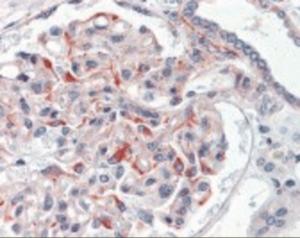 49-930
10079-312EA 582.9 USD
10079-312
Anti-JAG1 Rabbit Polyclonal Antibody
Antibodies
Jagged-1 (JAG1) is a cell surface protein which is one of several ligands that activate Notch and related receptors. JAG1 functions in an embryologically important signaling pathway and has also been shown to play a role in hematopoiesis. JAG1 inhibits proliferation of cd34+ macrophage progenitor cells and a JAG1 gene abnormality may be an aggravating factor in extrahepatic biliary atresia. Activation of NOTCH1 signaling by JAG1 induces monocyte-derived dendritic cell maturation in vitro. JAG1 interaction with NOTCH1 on tumor cells dramatically induces proliferation and inhibition of apoptosis in vitro. Either haploinsufficiency for wild-type JAG1 and/or dominant negative effects produced by mutated JAG1 are responsible for the Alagille syndrome. A BLAST analysis was used to suggest crossreactivity with Jagged-1 protein from human, chimpanzee, rat and mouse based on 100% homology with the immunizing sequence. Partial reactivity is expected against canine (81%) and Xenopus laevis (85%) based on partial sequence homologies as indicated. The jagged 1 protein encoded by JAG1 is the human homolog of the Drosophilia jagged protein. Human jagged 1 is the ligand for the receptor notch 1, the latter a human homolog of the Drosophilia jagged receptor notch. Mutations that alter the jagged 1 protein cause Alagille syndrome. Jagged 1 signalling through notch 1 has also been shown to play a role in hematopoiesis.

JAG1 antibody can be used in Western Blot starting at 1:500 - 1:1000, immunohistochemistry starting at 5 ?g/mL, and immunocytochemistry.