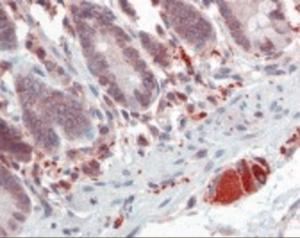 49-803
10076-502EA 582.74 USD
10076-502
Anti-TLR7 Rabbit Polyclonal Antibody
Antibodies
The Toll-like receptor (TLR) family in mammal comprises a family of transmembrane proteins characterized by multiple copies of leucine rich repeats in the extracellular domain and IL-1 receptor motif in the cytoplasmic domain. Like its counterparts in Drosophila, TLRs signal through adaptor molecules and could constitute an important and unrecognized component of innate immunity in humans. The TRL family is a phylogenetically conserved mediator of innate immunity that is essential for microbial recognition. TLRs characterized so far activate the MyD88/interleukin-1 receptor-associated kinase (IRAK) signaling pathway. Ten human homologs of TLRs (TLR1-10) have been described. Stimulation of the NFkB signaling pathway by TLR7 suggests that it plays a role in immune response. Toll-like receptors (TLRs) are signaling molecules that recognize different microbial products during infection and serve as an important link between the innate and adaptive immune responses. These proteins act through adaptor molecules such as MyD88 and TIRAP to activate various kinases and transcription factors. TLR7, like TLRs 3, 8, and 9, is localized in intracellular acidic compartments such as the phagolysosome and will recognize some single-stranded RNA viruses such as vesicular stomatitis virus (VSV) and influenza virus. Activation of TLR7 by VSV results in stimulation of the immune response including IFNa secretion, suggesting the importance of TLR7 in virus recognition.

TLR7 antibody can be used in immunohistochemistry starting at 10 ?g/mL, immunoprecipitation, and flow cytometry.