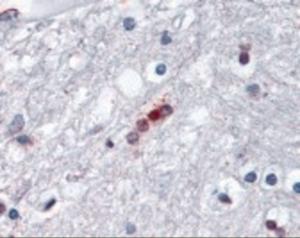 49-792
10074-548EA 593.09 USD InStock
10074-548
Anti-MBP Mouse Monoclonal Antibody
Antibodies
Suitable for use in ELISA, Western Blot, Immunohistochemistry and quantification of myelin basic protein. Other applications have not been tested. Recognizes residues 130-136 in human myelin basic protein (21.5kD and 18.5kD molecular forms). Species Crossreactivity: Primate, rabbit, sheep, goat, rat and mouse. The classic group of MBP isoforms (isoform 4-isoform 14) are with PLP the most abundant protein components of the myelin membrane in the CNS. They have a role in both its formation and stabilization. The smaller isoforms might have an important role in remyelination of denuded axons in multiple sclerosis. The non-classic group of MBP isoforms (isoform 1-isoform 3/Golli-MBPs) found in bone marrow and the immune system may preferentially have a role in the early developing brain long before myelination, maybe as components of transcriptional complexes, and may also be involved in signaling pathways in T-cells and neural cells.