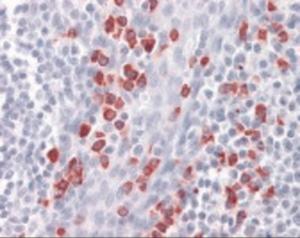 49-665
10079-158EA 582.9 USD
10079-158
Anti-DNMT3L Rabbit Polyclonal Antibody
Antibodies
DNA cytosine-5-methyltransferase-3 proteins are involved in de novo methylation of CpG islands. Mutations in the DNMT3B gene cause the ICF immunodeficiency syndrome. DNA methyltransferases and regulatory factors are likely to be involved in the establishment of maternal imprints in growing diplotene oocytes and paternal imprints in perinatal prospermatogonia. Imprinting is essential for viable development. Expression of the DNMT3L mRNA was not detectable by Northern blotting; however, RT-PCR amplification revealed that it is expressed at low levels in several tissues including testis, ovary, and thymus.

DNMT3L antibody can be used in ELISA, Western Blot starting at 1:1000, immunohistochemistry starting at 1.25 ?g/mL, immunocytochemistry, and immunoprecipitation.