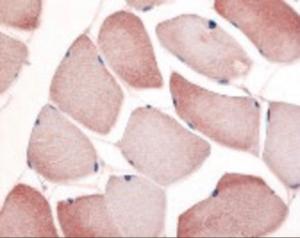 49-663
10079-154EA 582.74 USD
10079-154
Anti-CCNL1 Rabbit Polyclonal Antibody
Antibodies
Cyclin L (also referred to as CCNL) is encoded by two highly related genes Cyclin L1 and Cyclin L2 (CCNL1 and CCNL2, respectively). Cyclin L has been shown to associate with the PITSLRE kinase and is involved in pre-mRNA processing. Both Cyclin L gene products can be alternatively spliced to produce two isoforms (known as 1 and 2 or alpha and beta). Cyclin L2 is ubiquitous, expressed at much higher levels than Cyclin L1, and thus is likely the major partner for the CDK11p110 protein kinase.

Cyclin L1 antibody can be used in Western Blot, and immunohistochemistry starting at 1:100 - 1:200.