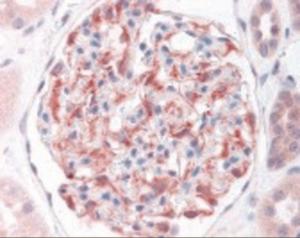 49-655
10079-142EA 540.97 USD
10079-142
Anti-ARNT Rabbit Polyclonal Antibody
Antibodies
Transcriptional responses to many environmental and developmental stimuli are mediated by the basic helix-loop-helix (bHLH)-PAS family of proteins, which form homodimers that bind regulatory DNA sequences. ARNT/HIF-1 beta regulates the expression of different sets of genes in response to distinct environmental challenges. ARNT forms a complex with arylhydrocarbon receptor (AHR) to activate expression of genes encoding P450. Once AHR binds it ligand, it associates with ARNT for transport into the nucleus. ARNT also dimerizes with HIF-1alpha, -2 alpha or -3 alpha in response to low oxygen concentration to induce the expression of hypoxia-regulated genes encoding vascular endothelial growth and other genes. The expression of ARNT/HIF-1beta remains fairly constant and the protein is found in the nucleus and the cytoplasm.