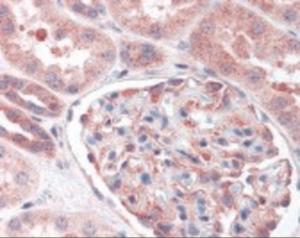 49-554
10076-420EA 615.27 USD
10076-420
Anti-NES Rabbit Polyclonal Antibody
Antibodies
Nestin, is a large intermediate filament protein (class Type VI) that was first identified with a monoclonal antibody by Hockfield and McKay (1985). Nestin is expressed predominantly in stem cells of the central nervous system in the neural tube. Nestin is expressed during development and in myotendinous and neuromuscular junctions. Nestin expression is restricted, typically disappearing by E18. Nestin is thought to be a reasonable neuronal marker; however, recent studies have found nestin expression in other cell types such as endothelial cells. Nestin expression is seen in almost all GBMs (Glioblastoma mulitformes) and many melanomas (both primary and metastatic) but not in any metastatic carcinomas. Upon terminal neural differentiation, nestin is downregulated and replaced by neurofilaments.