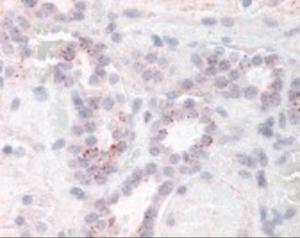 49-516
10079-068EA 615.27 USD
10079-068
Anti-RELA Rabbit Polyclonal Antibody
Antibodies
NFkB was originally identified as a factor that binds to the immunoglobulin kappa light chain enhancer in B cells. It was subsequently found in non-B cells in an inactive cytoplasmic form consisting of NFkB bound to IkB. NFkB was originally identified as a heterodimeric DNA binding protein complex consisting of p65 (RelA) and p50 (NFKB1) subunits. Other identified subunits include p52 (NFKB2), cRel, and RelB. The p65, cRel, and RelB subunits are responsible for transactivation. The p50 and p52 subunits possess DNA binding activity but limited ability to transactivate. p52 has been reported to form transcriptionally active heterodimers with the NFkB subunit p65, similar to p50/p65 heterodimers. Low levels of p52 and p50 homodimers can also exist in cells. The heterodimers of p52/p65 and p50/p65 are regulated by physical inactivation in the cytoplasm by IkB-a. IkB-a binds to the p65 subunit, preventing nuclear localization, and DNA binding. Activators mediate a rapid phosphorylation of IkB by IkB kinase (IKK), which results in subsequent ubiquitination and proteolytic degradation. NFkB is then transported to the nucleus, where it activates transcription of target genes through binding to NFkB target sequences within the promoter. The HTLV-I protein Tax can induce constitutive NFkB activation through phosphorylation of both I'B-a and I'B. The transforming protein Tax inhibits p53 transcriptional activity through the NFkB signaling pathway, specifically via the p65 (RelA) subunit. The inhibition of p53 activity is dependent upon phosphorylation of p65 (RelA) at S536 by the upstream kinase IKK.

RELA antibody can be used in ELISA, Western Blot, immunohistochemistry starting at 5 ?g/mL, and immunofluorescence.