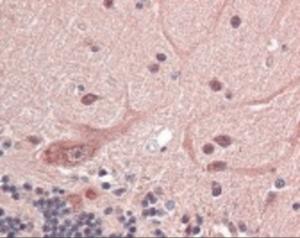 49-480
10079-012EA 615.27 USD
10079-012
Anti-RNF25 Rabbit Polyclonal Antibody
Antibodies
RING finger protein 25 (RNF25, also named AO7) contains a RING finger domain and is ubiquitously expressed in various tissues. RNF25 was initially identified in a yeast two-hybrid screen of a murine T-cell library by using UbcH5b, an E2 enzyme, as bait. RNF25 has also been shown to act as a putative E3 ligase, at least in vitro. RNF25 localizes predominantly in the nucleus and supports the transcriptional activity of NF-κB by interacting with p65 in vivo upon stimulation with TNF. Yeast two-hybrid data also suggest that RNF25 interacts with a number of other molecules which may be potential ubiquitin ligase substrates. Among these are molecules that have critical roles in signal transduction and in regulation of translation (personal communication, Allan Weissman, CCR-NCI, Bethesda, MD).

RNF25 antibody can be used in ELISA, Western Blot, immunohistochemistry starting at 1:1000, immunofluorescence, and immunoprecipitation.