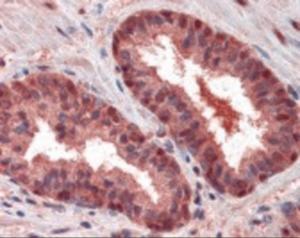 49-413
10078-906EA 582.74 USD
10078-906
Anti-CUL2 Rabbit Polyclonal Antibody
Antibodies
Cullins assemble a potentially large number of ubiquitin ligases by binding to the RING protein ROC1 to catalyse polyubiquitination, as well as binding to various specificity factors to recruit substrates. Cullin 2 is an essential component of the SCF (SKP1-CUL1-F-box protein) E3 ubiquitin ligase complex, which mediates the ubiquitination of proteins involved in cell cycle progression, signal transduction and transcription. In the SCF complex, cul2 serves as a rigid scaffold that organizes the SKP1-F-box protein and RBX1 subunits. Cul2 may also contribute to catalysis through positioning of the substrate and the ubiquitin-conjugating enzyme. Cul2 is part of the SCF complex consisting of CUL1, RBX1, SKP1 and SKP2, where it interacts directly with SKP1, SKP2 and RBX1. Cul2 also interacts with RNF7 and is part of a complex with TIP120A/CAND1 and RBX1. The unneddylated form interacts with TIP120A/CAND1 and the interaction negatively regulates the association with SKP1 in the SCF complex.