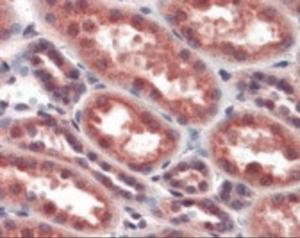 49-410
10078-900EA 582.9 USD
10078-900
Anti-CHUK Rabbit Polyclonal Antibody
Antibodies
NFkB comprises a family of cellular transcription factors that are involved in the inducible expression of a variety of cellular genes that regulate the inflammatory response and control of cell death. In the cytoplasm NFkB is negatively modulated by the inhibitory proteins IkB. In turn IkB is phosphorylated by a cellular kinase complex called IKK. IKK is a heterodimer composed of two kinases: IKK-a and IKK-b that phosphorylate IkB leading to its degradation and the resulting translocation of NFkB to the nucleus. IKK kinase activity is modulated negatively by pharmaceutical agents such as aspirin and positively by various cellular components such as TNF- a, endotoxins and overexpression of cellular kinases like MEKK1. Aspirin appears to have its effect by inhibiting the binding of ATP to IKK.

CHUK antibody can be used in ELISA, and immunohistochemistry starting at 12 µg/mL.