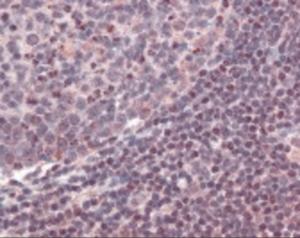 49-302
10076-308EA 582.74 USD
10076-308
Anti-MALT1 Rabbit Polyclonal Antibody
Antibodies
MALT1 is a caspase-like protein that contains an N-terminal death domain, two Ig-like domains, and a C-terminal caspase-like domain. It binds to Bcl10 through its Ig-like domains and cooperates with Bcl10 to activate NF-kappaB. MALT1 is thought to play an importantrole in NF-kappaB signaling by enchancing NF-kappaB activation through interaction with Bcl10 (Ho et al., 2005). Interaction between MALT1 and Bcl10 mediates IKK activation in vitro through facilitatiing the ubiquitination of NEMO by the ubiquitin-conjugating enzyme UBC13. Four recurrent chromosomal translocations have been described in non-Hodgkin B-cell lymphoma of the mucosa-associated lymphoid issue (MALT) type. Two of them,t(14;18)(q32;q21) and t(11;18)(q21;q21), are found in 30% to 50% of extranodal MALT lymphomas. The first translocation juxtaposes the MALT1 gene to the IgH promoter region, resulting in the deregulation of MALT1 expression, whereas the second translocation generates a fusion between MALT1 and the inhibitor of apoptosis gene API2 (cIAP2/HIAP1). The other two much rarer translocations, t(1;14)(p22;q32)and t(1;2)(p22;p12), target Bcl10 gene on the short arm of chromosome 1. Translocations involving Bcl10 and MALT1 may lead to elevated NF-kappaB activity in MALT B-cell lymphoma. Two alternatively spliced transcript variants encoding different isoforms (a and b) have been described for the MALT1 gene. Human MALT1 isoform a is an amino acid protein of 824 amino acids, and human MALT1 isoform b is an amino acid protein of 813 amino acids.