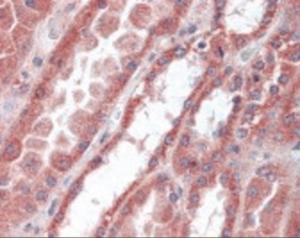 49-298
10076-300EA 582.9 USD
10076-300
Anti-IRAK4 Rabbit Polyclonal Antibody
Antibodies
IL-1 receptor-associated kinases (IRAKs) are important mediators in the signal transduction of Toll/IL-1 receptor (TIR) family members. The cytoplasmic domains of TIR proteins interact with the adapter protein, MyD88. MyD88 then recruits IRAKs (IRAK-1, -2, and M), which in turn interact with other adapter molecules, such as TRAF6 to activate NF-κB and MAPK pathways. Recently, a new member of this family, IRAK-4 has been identified. IRAK-4 may act as an upstream activator of IRAK-1. IRAK-4 is important for LPS activation of TLRS. Mice lacking IRAK-4 are resistant to lethal doses of LPS and are also severely impaired in their responses to viral and bacterial challenges (4, 5). IRAK4, an IRAK type protein kinase, is a signal transducer for the immune response Toll-like receptor and interleukin-1 (IL-1) receptor signaling cascades. IRAK4 has auto- and cross-phosphorylation kinase activity and has been shown to phosphorylate and activate IRAK1. Additionally, IRAK4 interacts with IRAK1 and TRAF6 in an IL-1-dependent manner, and overexpression of IRAK4 can activate NF-kappaB as well as mitogen-activated protein (MAP) kinase pathways. IRAK4 (-/-) mice are resistant to a lethal dose of lipopolysaccharide and are severely impaired in their responses to viral and bacterial challenges. At least two mRNA transcripts have been reported: 3.0- and 4.4-kb. IRAK4, also referrred to as NY-REN-64, was first identified as an anitgen in a screen of renal tumors.

IRAK4 antibody can be used in ELISA, Western Blot, and immunohistochemistry starting at 10 - 20 ?g/mL.