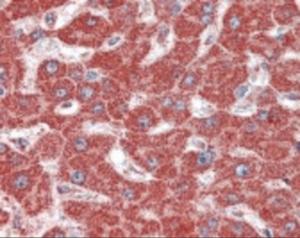 49-290
10076-284EA 582.74 USD
10076-284
Anti-HSPD1 Rabbit Polyclonal Antibody
Antibodies
HSP60, a 60 kDa member of Chaperonin family, is a mitochondrial protein that participates in protein folding, transport and secretion. HSP60 is a multi-functional protein whose roles include accelerating the maturation of pro-caspase 3 during apoptosis, LPS-binding, acting as a ligand for innate immune system and also binding to the surface of innate immune cells and stimulating proinflammatory reactivity. It induces the expression of IL-12 and IL-15 and also induces release of TNF-alpha, NO and IL-6. Reports suggest interaction of Hsp60 with integrin molecules during metastasis. Mutations in Hsp60 gene cause autosomal recessive spastic paraplegia 13. Hsp60 has been found to be involved in development of auto-immune disorders such as Rheumatoid arthritis, insulin-dependent diabetes mellitus, systemic sclerosis and atherosclerosis.

HSPD1 antibody can be used in ELISA, and immunohistochemistry starting at 10 ?g/mL.