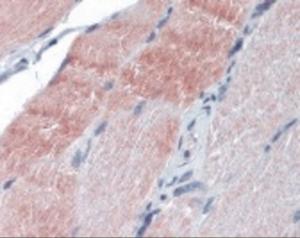 49-268
10078-752EA 582.9 USD
10078-752
Anti-CASP7 Mouse Monoclonal Antibody [clone: [25B881.1]]
Antibodies
Caspases are a family of cysteine proteases that are key mediators of programmed cell death or apoptosis. The precursor form of all caspases is composed of a prodomain, and large and small catalytic subunits. The active forms of caspases are generated by several stimuli including ligand-receptor interactions, growth factor deprivation and inhibitors of cellular functions. All known caspases require cleavage adjacent to aspartates to liberate one large and one small subunit, which associate into a2b2 tetramer to form the active enzyme. Caspase-7 is derived from the cleavage of proMCH3-alpha into 2 subunits, p20 and p12 by Caspase-3. Sequence analysis revealed that the MCH3-alpha amino acid sequence had the highest homology to caspase-3 (53% identity) and less than 37% identity with all other family members. Caspases are a family of cysteine proteases that can be divided into the apoptotic and inflammatory caspase subfamilies. Unlike the apoptotic caspases, members of the inflammatory subfamily are generally not involved in cell death but are associated with the immune response to microbial pathogens. The apoptotic subfamily can be further divided into initiator caspases, which are activated in response to death signals, and executioner caspases, which are activated by the initiator caspases and are responsible for cleavage of cellular substrates that ultimately lead to cell death. Caspase-7 is an executioner caspase that was identified based on its homology with caspases 1 and 3, as well as the C. elegans cell death protein CED-3. Alternative splicing of Caspase-7 mRNA results in the production of 3 distinct isoforms. Caspase-7 activity can be directly inhibited by XIAP expression.

Caspase-7 antibody can be used in ELISA, and immunohistochemistry starting at 5 ?g/mL.