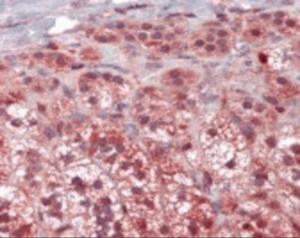 49-193
10078-656EA 582.9 USD
10078-656
Anti-BAX Rabbit Polyclonal Antibody
Antibodies
Apoptosis plays a major role in normal organism development, tissue homeostasis, and removal of damaged cells. Disruption of this process has been implicated in a variety of diseases such as cancer. The Bcl-2 family of proteins is comprised of critical regulators of apoptosis that can be divided into two classes: those that inhibit apoptosis and those that promote cell death. Bax, a pro-apoptotic Bcl-2 family member, is a cytosolic protein that changes conformation and translocates to the mitochondria following apoptotic stimuli. It is thought to share significant functional homology with Bak, another pro-apoptotic Bcl-2 family member, as disruption of bax or bak has little effect on cell death, but mice lacking both genes display multiple developmental defects and cells lacking both show decreased apoptotic capability.

Store BAX antibody undiluted at 4 °C. Do not freeze.