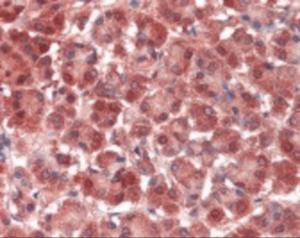 48-677
10078-276EA 615.27 USD
10078-276
Anti-PARK7 Rabbit Polyclonal Antibody
Antibodies
The product of the PARK7 gene, known as PARK7, Parkinson disease (autosomal recessive, early onset) 7, DJ-1 mutant, and DJ-1 oncogene product, functions as a positive regulator of androgen receptor-dependent transcription. PARK7 may also function as a redox-sensitive chaperone and as a sensor for oxidative stress and also has been reported to prevent aggregation of SNCA. PARK7 protects neurons against oxidative stress and cell death and plays a role in fertilization. While PARK7 has no proteolytic activity, it does have a weak transforming activity. PARK7 forms a homodimer and binds to DJBP and PIAS2. PARK7 is part of a ternary complex containing PARK7, DJBP and AR and shows both a nuclear and cytoplasmic localization. In some cells, PARK7 is associated with mitochondria, particularly after oxidative stress. This protein is highly expressed in pancreas, kidney, skeletal muscle, liver, testis and heart tissue, and is expressed at lower levels in placenta and brain. PARK7 is detected in tau inclusions in brains from neurodegenerative disease patients, in astrocytes, Sertoli cells, spermatogonia, spermatids and spermatozoa. Defects in PARK7 are the cause of autosomal recessive early-onset Parkinson's disease 7 (PARK7). Parkinson's disease (PD) is a complex, multifactorial disorder that is characterized by bradykinesia, resting tremor, muscular rigidity and postural instability, response to treatment with levodopa, the loss of dopaminergic neurons in the substantia nigra and the presence of Lewy bodies (intraneuronal accumulations of aggregated proteins) in surviving neurons.

PARK7 antibody can be used in Western Blot, and immunohistochemistry starting at 2.5 μg/mL.

Store PARK7 antibody at -20 °C prior to opening. Dilute only prior to immediate use. Avoid multiple freeze-thaw cycles.