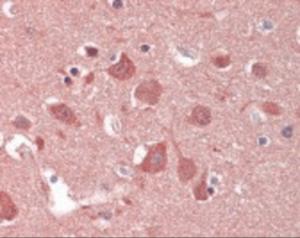 48-507
10078-164EA 540.97 USD
10078-164
Anti-BCL2L1 Rabbit Polyclonal Antibody
Antibodies
Apoptosis plays a major role in normal organism development, tissue homeostasis, and removal of damaged cells. Disruption of this process has been implicated in a variety of diseases such as cancer. Bcl-xL is a member of the Bcl-2 family of proteins that are critical regulators of apoptosis. These can be divided into two classes: those that inhibit apoptosis and those that promote cell death. Bcl-xL is an anti-apoptotic mitochondrial protein related to Bcl-w and the major transcript of the bcl-x gene. Its high expression in tumors is correlated with advanced disease and poor prognosis. Bcl-xL expression level increases in response to several stimuli such as ionizing radiation and treatment with chemotherapeutic agents.

BCL2L1 antibody can be used in immunohistochemistry starting at 20 ?g/mL, and flow cytometry.