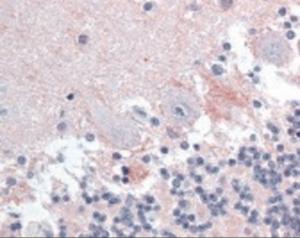 48-504
10078-158EA 582.9 USD
10078-158
Anti-BAD Rabbit Polyclonal Antibody
Antibodies
Members in the Bcl-2 family are critical regulators of apoptosis by either inhibiting or promoting cell death. Bcl-2 homology 3 (BH3) domain containing pro-apoptotic proteins, such as Bax, Bid, and Bik, form a growing subclass of the Bcl-2 family. Another such protein is the Bcl-2-antagonist of cell death (Bad). Bad regulates apoptosis by forming heterodimers with anti-apoptotic proteins Bcl-2 and Bcl-xL, thereby preventing them from binding with Bax. Bad activity is regulated by its phosphorylation; it is inactivated by kinases such as Akt and MAP kinase and thus promotes cell survival, whereas JNK-induced phosphorylation promotes the apoptotic role of Bad.

BAD antibody can be used in ELISA, Western Blot, immunohistochemistry starting at 5 ?g/mL, and immunofluorescence starting at 10 ?g/mL.