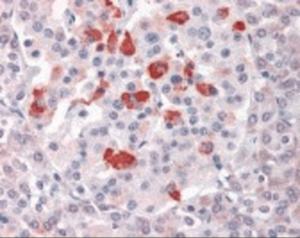 48-373
10078-050EA 582.9 USD
10078-050
Anti-BACE Rabbit Polyclonal Antibody
Antibodies
Bace 1 is responsible for the proteolytic processing of the amyloid precursor protein (APP). Cleaves at the N-terminus of the A-beta peptide sequence, between residues 671 and 672 of APP, leads to the generation and extracellular release of beta-cleaved soluble APP, and a corresponding cell-associated C-terminal fragment which is later released by gamma-secretase.