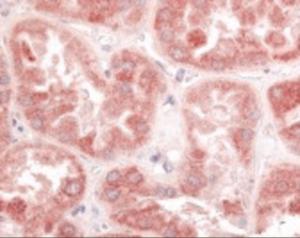 48-284
10075-918EA 582.9 USD
10075-918
Anti-ESRRG Rabbit Polyclonal Antibody
Antibodies
Estrogen receptor-related receptor (ERR gamma), a NR3 Steroid Receptor, has been suggested to affect differentiation of the brain, heart, and kidney. ERR gamma binds as a monomer to an extended half-site of the ERRE type (TCAAGGTCA). ERR gamma has been shown to interact with PGC-1 alpha and has been implicated in the regulation of mitochondrial energy metabolism. In humans, ERR gamma pre-mRNA undergoes extensive alternative splicing at the 5’ end, yielding at least six mRNA splice variants and two protein isoforms that differ by 23 amino acids in the N terminus. ERR gamma has been shown to be overexpressed in breast tumors, and its expression is correlated with levels of ErbB4, a likely indicator of preferred clinical course. As a result, ERR gamma has been suggested to be a potential biomarker for favorable clinical course and, possibly, hormonal sensitivity, and as a candidate target for therapeutic development.

ESRRG antibody can be used in immunohistochemistry starting at 10 - 15 ?g/mL.