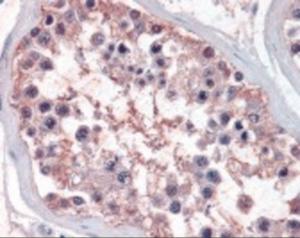 48-282
10075-914EA 582.9 USD
10075-914
Anti-NR0B1 Rabbit Polyclonal Antibody
Antibodies
DAX-1 (DSS-AHC critical region on the X chromosome, gene 1) is an orphan NRO Knirps-Like nuclear receptor that is involved in adrenal gland and gonad development. DAX-1 has been shown to negatively regulate transcription of the nuclear receptor steroidogenic factor 1 (SF-1). DAX-1 is also involved in the development and differentiation of anterior pituitary cells and in steroidogenesis. In the nucleus, DAX-1 binds to a retinoic acid-responsive element (RARE) and acts as a dominant-negative regulator of retinoic acid receptor-mediated transcription. DAX-1 gene transcription is regulated by Ad4BP/SF-1 (NR5A1) and is suppressed by androgens and the androgen receptor (AR/NR3C4); AR down-regulated DAX-1 gene transcription is mediated by Ad4BP/SF-1 in the presence of the ligand. Recently it has been shown that DAX-1 is required for testis development (Meeks et al. 2003). Mutations in the human DAX-1 gene lead to X-linked adrenal hypoplasia congenita and hypogonadotropic hypogonadism. Recently two isoforms of DAX-1 has been identified.

NR0B1 antibody can be used in immunohistochemistry starting at 13 ?g/mL.