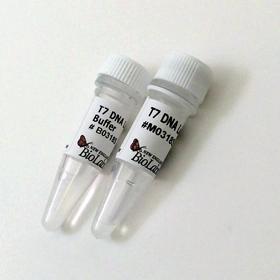 It will catalyze the formation of a phosphodiester bond between adjacent 5´ phosphate and 3´ hydroxyl groups of duplex DNA. Cohesive end ligation and nick sealing can be efficiently catalyzed by T7 DNA Ligase. However, unlike T4 and T3 DNA Ligases, blunt end ligation is not efficiently catalyzed by T7 DNA Ligase. Addition of high concentrations of PEG 6000 [≥ 20% (w/v)] to the reaction can force T7 DNA Ligase to have measurable activity. However, under typical reaction conditions blunt-end DNA ligation does not occur in the presence of T7 DNA Ligase, making it a good choice for applications in which blunt and cohesive ends of DNA are present but only the cohesive ends are to be joined.